Salvatore “Sam” Campo grew up on a farm with parents who were immigrants from Sicily. When Sam joined the U.S. Army, he moved from Louisiana to Houston, Texas. Sam met Marie Vetrano and they later wed. He began his journey as a business owner with Marie by his side. Sam opened Campo Sheet Metal Works in 1926 in the 7200 block of Harrisburg Blvd. The shop was about 600 square feet of space adjacent to his home. When the doors opened at the shop, Sam had only a 3rd grade education and Marie a 6th grade education. Sam adapted to his environment and learned what he needed to in order to succeed. Marie had a friend teach her bookkeeping so she could keep records for the company. Sam started his business fabricating gutters and flashing as well as other miscellaneous sheet metal work. As time went on, Campo Sheet Metal grew and expanded their capabilities. By 1945, a new shop building was constructed, increasing the shop area to 2500 square feet. 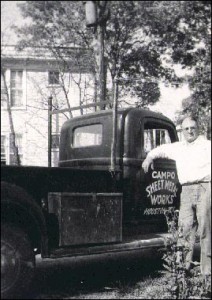 Vincent Campo, also known as Sonny, began working with the business at a young age. He assisted his father after school in the shop making gutters, gutter tubes and flashing. Vincent worked at Campo Sheet Metal for the entirety of his lifetime, except for the years when he served his country. He is a WWII veteran who proudly served our country in the army as part of the 42nd Infantry Rainbow Division, 222nd Battalion, Company B. His division landed in Marseille, France on December 9, 1944. His division liberated the Dachau concentration camp as one of its final victories in the war. When he returned home, Vincent went back to work at Campo Sheet Metal. Under his leadership the company expanded into new industrial based markets. With the expansion of the company, he outgrew the space his father had moved the company to. When looking for a new space, Vincent wanted to remain close to the roots of the company and his family. He purchased a lot on Lindbergh Street and built a 30,000 square foot facility. Vincent worked at the company well into his 70’s. Vincent passed away in 2008 living a life full of happy memories and many adventures. 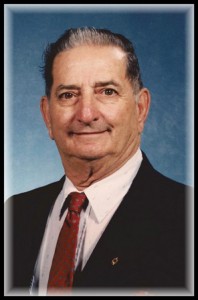 Sammy’s two oldest sons, Joseph and Patrick Campo, began working at the shop at a young age doing just about everything. As they grew up, their responsibilities also grew. Joseph began working at the shop as a full-time employee in August of 2010 after he graduated from Texas Tech University. Joseph started as a project engineer and was promoted to Vice President of Manufacturing after years of dedication and commitment to growing the company. Patrick began as a full-time employee upon his graduation from Texas A&M University in August of 2013. Patrick was a project engineer, assisting on projects and learning how to maintain machines. Both boys loved their jobs at Campo Sheet Metal. Sadly, Joseph and Patrick are no longer with us as they passed away in a tragic car accident during a hunting trip. Joseph and Patrick lived extremely happy lives surrounded family and friends and doing the things they loved the most.

Sammy’s daughter, Elizabeth Campo, began her journey with the company just as the generations before her. She started at a young age helping in the office and learning to fabricate small projects. She began working full-time at Campo Sheet Metal after graduating from Texas Tech University in August of 2017 with a Bachelor’s in Business Administration in Accounting and Construction Management. Elizabeth currently works in the office with a variety of responsibilities.

Sammy’s youngest son, Stephen Campo, has a similar path to the company as his older siblings. Stephen worked a variety of jobs in the shop during his high school and college days. Upon his graduation, from Texas A&M University in August of 2018 with a Bachelor’s in Civil Engineering, Stephen began his full time career at Campo Sheet Metal. He currently works as a project manager and CAD drafter.